Quilt Show was a great success!

So bring on the lazy crazy days of summer, I'm ready for them.  More lazy, less crazy if you please.

Here are some highlights of the show.  I brought home a 2nd place ribbon for my Guild Challenge - A View From the Deck.  So I guess I'll keep quilting!! 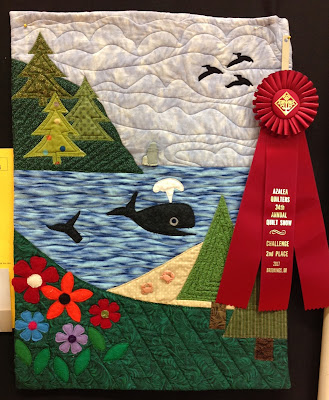 Had a minor success selling at the country store.  First time I haven't just donated my items to be sold by the guild.  It's surprising what didn't 'go' with bargain-basement prices too!!

The Viewer's Choice this year was a Wall Quilt!  It won THREE ribbons, each one well deserved! 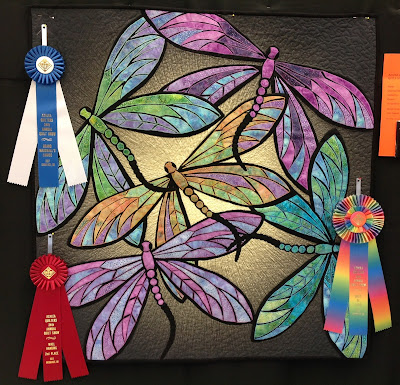 We had NINE hand quilted entries!  Last year we had to talk the Chairman out of taking the category out of the show.  Instead we lowered the size requirement from a double bed to 'bigger than a crib' quilt.  Several of us started hand quilting but didn't get it finished - I'm one of them!  So-o "Next Year" is the rally cry!!

But by far the highlight of the show for me, was the QOV presentation.  We set out a full rack of chairs, and at the start time, pulled out another rack, set them up and there was still a standing room only crowd!  The Coast Guard Honor Guard was very impressive and set the tone perfectly.

The Veterans receiving the quilts were all very appreciative and loved their hugs!  It went so well for our first try!  I'm waiting for photos from our 'official' photographer.  But here is the group shot of all with their quilts.  More to follow.

Who knows!  For today, sitting under a quilt with a good book sounds perfect.  We already walked the low tide.  Saw five Starfish and a bazillion rocks!  The sand is so low, there are lots of rocks for the picking!!

#WhyIRead is a contest this month celebrating the 200th anniversary of Harper Collins Publishing. I read fiction for the fun of it - the escape - the downtime. I can shut off my mind (ok, I heard you snickering!) and go where the author takes me. So much of life is reading to get information. Reading for enjoyment is a whole different world!

I love "adult Nancy Drew" books. A mystery, a feisty heroine and good story is a great way to spend time. But wait there's more!! I love Science Fiction, I love our Book Club selections, I love discovering new books from favorite authors. AND I really love having a friend hand me a book or tell me about a book I H*A*V*E to read!!

I read every night before bed. And most days,for a little while, I read out on the deck, or in the armchair cozy with a quilt. I love reading to my grandkids and hearing them read to me.

I read ebooks on my computer but I still love that feeling of the book in my hand. Like the weight of a quilt, it comforts!

So - go read something! It's good for the soul.

PS  Yes, my bookshelf picture is of a shelf of non-fiction!! But it was taken this morning - just to point out that books can be your decorating theme too!! They go very well with a 'beachy' theme!(tee-hee)

PPS And - having trouble with blogspot formatting today! Must go read and find out what I'm doing wrong!  This will not be reading for entertainment!!

I thought I was going to get so-o-o-o much done today!  I had plans, darn it!! Well, I got caught in a "Spring Cleaning Your Studio" Blog Hop.  Does that count??

If you have hours to waste, I mean, if you are looking for ideas on studios - this is the place!!

Each blog is more enticing than the last!  You can get seriously hooked!  Thanks Cheryl for introducing yourself and your studio-links!   But when will we have time to work on our own studios????

It's T-minus 6 days to the Annual Azalea Festival here on the Southern-most Oregon coast.  Seriously, it's 7 miles to California!!  I hear it's an awesome festival - it's also the Quilt Show for us, so I haven't seen much of anything else that is going on.

But if you're looking for lovely weather (check!) Some awesome quilts (check!) and a great place to kick back alittle - come see us at Brookings Oregon over Memorial Day weekend.

Our (my) first Quilt of Valor Presentation Ceremony is Sunday, May 28, 2017 at the Kaliopsis Elementary School gym.  That's where we hold the show every year.  It will be at 2 pm.  We are presenting quilts to 17 veterans.  We're so excited and nervous!

I had a quilt to present today - the Korean War Veteran 'doesn't get out much'.  It was my first presentation and I have been driving myself crazy.  But I was so glad to 'get it under my belt.'   The presentation doesn't have to be perfect, moving or even about the quilters.  I found that if I can help the veteran to relax, and not be nervous too - it's all good!  I think, if I can just remember that, the big presentation will go well. Fingers crossed.

I'll be back tomorrow with how much I'm getting done!!!?  Promise!

Happy Mother's Day to one and all! 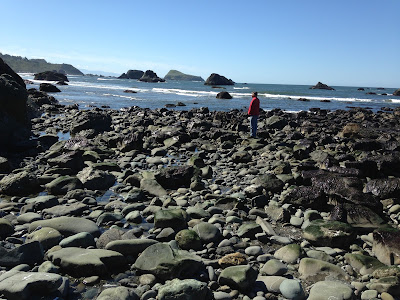 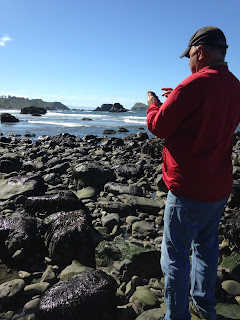 We decided to take advantage of a low tide and walk our beach.  Lo and behold - there is no beach!  It's all rocks, more than we have ever seen! 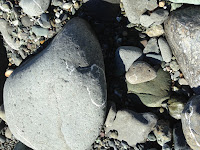 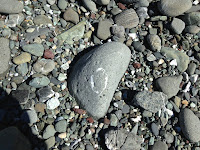 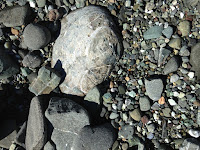 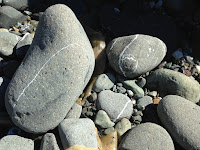 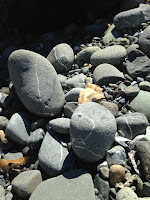 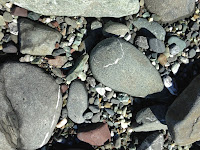 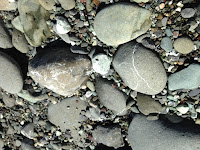 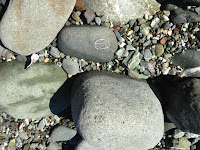 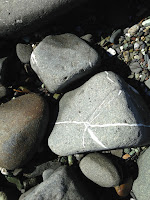 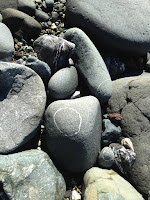 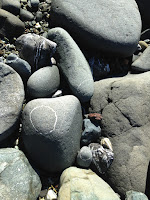 And lots of "O" rocks.  DE told me "That Oprah, she's copyrighting everything now!!"

Today my computer updated and now - when it 'goes to sleep' I get to see pictures stored on my computer.  There are a lot of quilt pictures - you guessed that, right?  But I've also seen my children, all 4 grandchildren, my mom, my mother-in-law, loads of family.  Happy times!  It's mesmerizing!!  I had to actually force myself to stop it to blog!!  It's been fun to watch it, especially on Mother's Day!!
Posted by doni at 7:23 PM No comments:

We were on a babysitting gig for 8 days!!!  Two locations, four adorable grandchildren, one tired (and cranky) Nana and Papa team!!  But what fun to connect with our grandchildren!

At Portland - starring Mr M (8) and Miss P (10) it's all about the schedule! Both are on a Baseball or Softball team.  That Saturday we had two games and a birthday party at the Trampoline center!!  Thank goodness for the other Nana, we were given a ride home from Miss P's game, she was able to get ready for the party, and rejoined Papa and Mr M for the second game.  It dripped, drizzled on us all day.  But no game was cancelled - they've already missed too many with soggy fields.

The party was still going strong when I came to pick up Miss P.  I had to hunt her down and watch the bouncing antics of fourth graders!!  It's amazing - what we would have given for that type of facility when we were growing up!

We played Pictionary one evening - had a few discussions about "that doesn't look like a (insert assignment here)  This is what (insert same assignment here) looks like = another indecipherable drawing here!! LOL!

Mr M drew "Grave".  He drew a gravestone with a rounded top, R.I.P. written on it, Threw his pencil down (mike drop??) as he declared "DONE!" No one had guessed yet!  But he was right, it was easy!

We had Monday to ourselves.  It was finally a nice day - I sent DH to the golf range after he dropped me at the MAX station.  He practiced and I spent hours at Powells!  Win-win!!

Wednesday was the challenge day! They go to school 20 minutes away from where they live.  Mr K got out of Montessori at 1.  Mr D got out of kindergarten at 1:45.  Mr D has karate at 4!!  We spent some time at ScienceWorks - the children's science museum between. Nana was tired by the time we were headed home.

Mr K thought his backpack was too heavy (lunchbox and water bottle!)  I carried it just to get him to the car.  As I was strapping him in he whispered, "You're the best Nana ever!"  Who can resist that??

They don't usually have tv in their schedule but mom and dad said, "do what you have to!"  The good thing about that - it makes an awesome reward!!  So Wednesday night we watched the first part of "The Secret Life of Pets" and the 2nd part on Thursday night.  We absolutely loved the happy peals of laughter from the boys during the movie!!

There was quite the rockslide on 199 today. 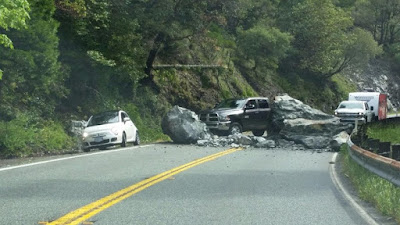 As this article remarked, not our usual basketball sized rocks!!  They cleared it pretty fast, but going down a mountain beside a river, there are no alternate roads to detour on!  I shudder to think of sitting on the road waiting for it to clear, or even worse - mom and dad trapped at the coast and Nana and Papa still babysitting!!!!  LOL!

As I got caught up on all things 'normal life'  I was able to check my email.  There was a notice that MY postcard for the Sister's contest "Wish upon a Card" was chosen to be framed and be in the auction!!!  Woo-hoo!!  Only 11 cards were chosen ... the charity raises money for scholarships for the local high school students.  I'm pumped!

You may remember this project - but here it is again.  In all it's glory!! 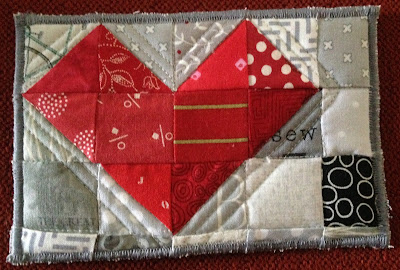