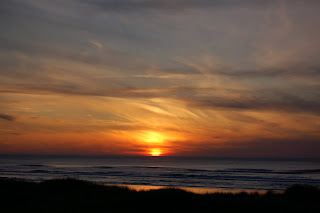 Here is the one sunset we were able to enjoy this week - I know, isn't it beautiful. But, seriously, would it hurt to have a day without rain??

Today's weather was really interesting. I woke up at 3:30ish - pretty unusual for me!! and the wind was already howling from the South. When it rained, it was truly raining sideways! Then it got calm for, I'm not sure, 30 minutes maybe? Long enough that we noticed and remarked that maybe it was going to clear up today. Then, BAM, the wind was howling from the North! Was that an eye of a hurricane??

I finished two things this week. Hip hip hooray! But I can't show them to you - Boo Hiss! I finished Mr M's name banner and since it doesn't say "Mr M" on it ... you'll just have to trust me!

The second finish was my favorite baby quilt panel machine quilted and with a satin binding. I'm not crazy about satin bindings - it kept sticking to my hands. Now you know my little secret ... manicures are not top on my list!!! Is everyone else's hands really dry from all the hand washing during flu season???

It was my first time using 505 spray basting - yes, M - I finally tried it and I liked it! And my first time for the satin binding, I'm sure I'll get better with that. Maybe I'll wear my machine quilting gloves next time! I'll try to get a picture of Mr M with the baby quilt this weekend.

I was a couch potato this week because of a problem with my foot - all better now! AND I was able to read Stephen King's newest - Under the Dome. 1074 pages!!! It came out on Monday, I was first on the request list at the library and I was done Wednesday evening! I was a 'power-couch-potato!'

I liked it! It got kind of strange at the end - bringing all those story lines back together - but you expect that with him. I think it's the best thing he's written since the accident. Not as edgy as some of them have been. I'm smiling thinking there can't be too many grey haired Nanas who finished it that quickly!!! If you're a fan - don't let the size scare you away. It reads really fast! And let me know what you think!

I'm happy to report that the Back to School ABC block exchange I was running at the guild was a success. ALL the blocks came in on time!!!! Hip hip hooray, indeed. Of course, not everyone followed the instructions, but close enough for government work, I guess! When I woke up this am - when it was obvious I wasn't going back to sleep ... I drew out settings for the ABC blocks. It's really going to be fun!
Posted by doni at 10:22 PM No comments:

Labels: Stephen King's Under the Dome 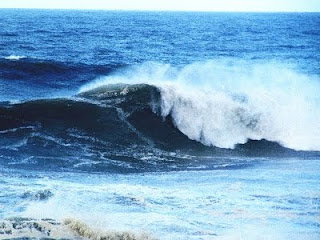 Well, we are here at the coast for our first storm. And it's been really interesting to watch. The ocean has swells 15 inches higher than usual - add high tide to that and it was quite the show! Waves were breaking against our dune and splashing 20 feet high! These photos were taken by my neighbor [and friend] J. 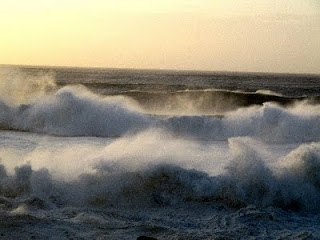 I watched all weekend - while sewing at the diningroom table! I'm almost done with Mr M's name wallquilt. I made Miss P one 3 years ago, and their mom hasn't really used it so I'm hoping with one for Mr M too - they will make their 'debut'!

This week is guild and the Back to School Applique alphabet blocks are due. I have the majority of them here, but no complete alphabets. So Thursday is the day - will all the letters show up?? I really hope so. Since I was sorting the bags into ABC1 and ABC2 I got to see them up close and personal - some are so cute. People have really thought it out. For example - I is for iguana and the background is jungle leaves! They are going to be so much fun to work with. Can't wait to see what everyone is going to come up with! We exchange the blocks - but you finish them and you can set them any way you want to. So square in a square, YBR, churn dash ... the possibilities are endless. We hope to have quite a few done for the show next August.

I washed my signature fan quilt this weekend. A stain had developed from white wine - I don't want to talk about it! Oxy-clean didn't get it out so now I'm stumped. When I wet the quilt, even though I've had it for twenty-some years, the smoke smell simply rolled off of it. My grandmother smoked like a chimney - but I'd never smelled it on the quilt. Anyone with an idea for the stain - let me know! Thanks.
Posted by doni at 6:27 PM No comments:

Is it too late for a New Year's Resolution???? 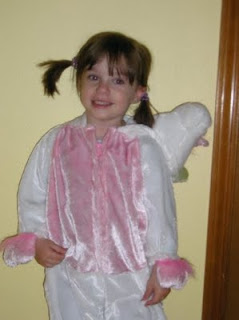 First, I'll start out with some halloween pictures of the GKs. Miss P was a unicorn this year! Gotta love that cute little 3 yr old face! She was going to be a princess - but we HAVE been watching a unicorn cartoon movie alot lately and the babysitter had a unicorn costume - the rest is history! 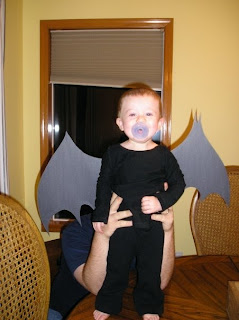 Believe it or not - Mr M, the 'bat boy' is only one year old this month! Okay, maybe the binky gave it away! He didn't like his costume, so a binky kept him in it long enough for the pictures. His haircut makes him look like he's three! He just went thru another growth spurt but I can definitely see 'shades of things to come'!!!

Yesterday, M over at Stashbusters, lamented that she has so many books that if she just made one from each it would keep her busy for years. The light bulb went on!!!

Using the books we already own to make something!

What a concept! LOL! I made that resolution a few years back - I think I made ONE! However, that was one more than I had made before!

I'm in - let's finish a project every quarter, from a book, pattern, magazine or kit we own! Now referred to as "resources"!

That would be 4 or 5 projects - [see below], I know it's only a start - but hey! We have UFOs to finish too. And we know life is going to intervene! We COULD combine different resources and redesign something. I even have a quilt I charted out on graph paper oh-so-many-years-ago that I named "Red Wagon-ish"! I think I combined designs and layouts out of 3-4 of their books.

Linda Brannock was at our retreat once and she said something profound that I never forgot. She said, "Just because we design it that size, doesn't mean you have to make it that size!!!" WOW! Freedom! I immediately took her very large 'donkey cart' fall quilt and made it a 20 x 36 wall quilt. It's one of my favorites! In fact, I think we made 3 of them!

If you combine patterns in different resources - well, you are using them - so it counts for each resource. You might tell us which resources in your post or comment here. There was a pumpkin quilt I finally finished last July that used pumpkins out of 3 different books. AND following the edict above - I reduced them to 'play nicely' with each other!!!

Okay - there are two months left this year - anyone game to try to finish ONE by the end of the year? It might make a great holiday decoration or a present!!! If we don't get it done by December 31st - hey, we have a great start on the first one for next year!

So the challenge is: make 1 project this year and 4 projects in 2010 that are from books, patterns, magazines or kits you already own. It doesn't have to be exactly what is pictured: You can make a pillow, you can make a notebook cover, you can make a charity quilt, a miniature or adapt the idea to your own design. Just make a note of which resource you used/were inspired by. I'm going to write it in my book - inside the front cover! A post-it added to the pattern or magazine would work too!

Definitely document it in the journal you document your quilts in - you DO do that - don't you!! Okay - another resolution for you!!! LOL!

PS - don't be discouraged if you're inspired to make two things from the resource! I know you don't get to mark off another resource that you used ... but you just confirmed it was a great buy!!! LOL!
Posted by doni at 10:37 AM 1 comment: 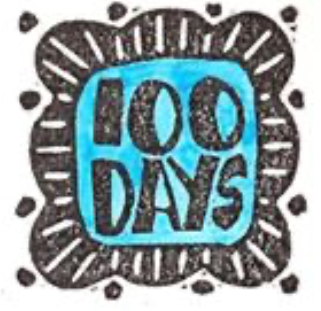