We were on vacation ... can you guess where we've been? 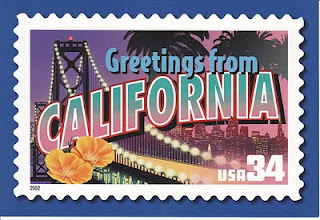 It's true, it's true - I got DH out of Oregon for 'basically the first time' since we moved here - almost 3 years ago!!

We had lovely weather along the coast in January - R was able to go golfing 10 times!! But we had the chance to go to Palm Springs and stay with Newport friends so we skedaddled out of here! The weather has turned B*A*D since we returned - causing R to start planning next year's trip - to stay LONGER!!

We drove South on I5 - delivering baby furniture to A&J2 and having lunch with R's golfing buddy in Ashland. Stayed in Redding with good friends B&D and then the long stretch to get to Palm Springs. We had our first In-N-Out Burger in Bakersfield. We got to Palm Springs to perfect weather - 70s, dry air and no wind!! Now that's what we're talking about!!

Sunday we took off to explore. We took the Aerial Tramway up the mountains 8500 feet above sealevel! - that's where you can sled in snow and find really big pine cones!! Then we went to my first 'new' 3D movie - The Hubble at IMAX. I was blown away! See it if you can!! Dinner was at an Italian restaurant. Our local Italian place closed when we moved to Brookings and we've been desperate for good Italian that we didn't have to cook ourselves!! That dinner was the first of lots of good Italian on this vacation! 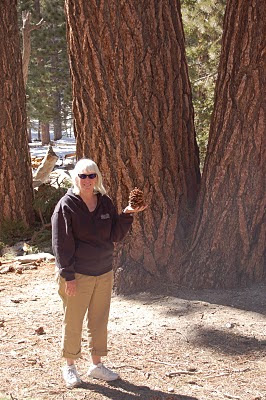 I was great the first few days. We even went twice to Water Aerobics at the city pool. Pool's capacity was 680!! Yep, it was LARGE! Valentine's Day found us at Torme's Supper Club with a live band and dancing with my husband!! Very fun. 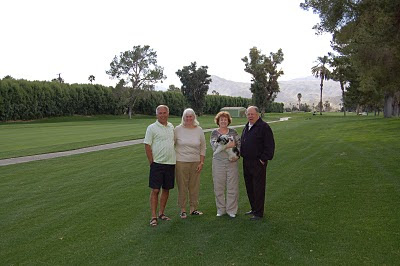 Then I got an 'allergic reaction of epic proportions' to something blooming in the desert! After a week in paradise (with a box of Puffs at my side) we headed to DISNEYLAND where I promptly picked up my "1st timer" button!! 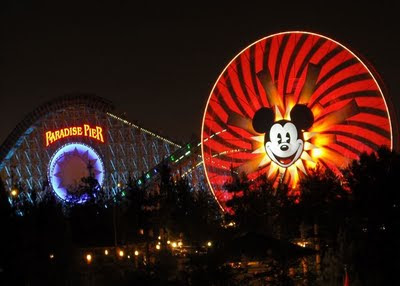 L - a good friend from Newport went with us and she is the BEST Disneyland fan!! We had a blast with her as our guide. Loved California Adventure and "Soarin' Over California!" Second favorite was Mr PotatoHead's Arcade where I surprised my husband by having more-than-double his score!! Watch out! - I'm a mean, green, shooting machine!! The new California Adventure water-laser show "A World of Color" is simply unbelievable! When you're there - don't even think about leaving early!!

The next day R&I went to Disneyland by ourselves and we did well! Actually rode the Indiana Jones ride and Space Mountain before official opening! Magic Hour is!! Of course, we were pooped from the day before, didn't have L with us and it started raining at 2:15 ... but still, lots of fun! Scoped it out for our next visit with the grandkids!! Maybe to celebrate our 40th anniversary??? It's a thought!

Saturday it was still raining as we left LA. We made it to Santa Barbara where R attended half a year of kindergarten a l*o*n*g time ago! I toured my first mission and we stumbled across an awesome Italian restaurant downtown. They were cooking something garlic when we walked by - R immediately went in and made reservations for that night! The downtown is everything you'd want - great shopping, great food and many theaters. We saw a movie while hiding out from the rain before dinner.

Sunday saw us heading for Monterey. We had breakfast in Malibu and it was sunny and wonderful driving up Big Sur. We immediately drove the 17 mile loop around Pebble Beach. Stopped and bought sweatshirts and then had dinner at the slowest Big Bear Diner in the west!! It was comical - we advised new customers [under our breath] to order breakfast ... cuz they'd still be there!! Helpful in many ways, I'm sure!! 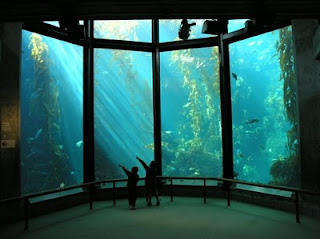 Monday morning we were at the Aquarium. I'm happy to say it was awesome, and also proved the little aquarium in Newport is very good too!! They had a seahorse display that was amazing. R fell in love with the Leafy Sea Dragon! Now that's a funky animal!! 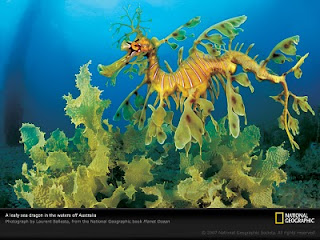 On to San Francisco - and wow! We had clear weather and it was so much fun - my 1st time there and we triangulated that town!! The first thing we did after checking into our motel by Fisherman's Wharf was buy 'hop on and off sightseeing by bus' tickets good for two days! There were 4 tours and we took them all! Went around downtown several times; went out to Golden Gate Park where museums reside!; went to Saucilito over the Golden Gate Bridge and then took the night tour too!

And the food - let me tell you - it was not on our diets, but boy-oh-boy was it good!! The first night, Neptune's on Pier 39 - creamiest clam chowder we'd ever had and you know we have it every chance we get!! I'll dream of that chowder until we go back for more!

Lunch the next day was in Chinatown at R&G Lounge. R declared it was better than the food he had in Taiwan and Hong Kong! That night we went to Alioto's where I had some pasta that saved my life!! We'd just come off the night bus tour, where we were upstairs in the open air bus and we were frozen!!

The last day we bought day passes for the Muni-system. Cable cars all day long! What a blast!! The Powell and Mason line started a block from our hotel. We rode it downtown and then a different one back to the wharf. Then up to the top of Lombard street - the crooked street. We got off and walked down - trust me, it was better than walking up!! 31% grade!! Then we got on a bus to the Coit Tower. Toured the tower and then walked down Telegraph Hill hoping to see the wild parrots. [no luck] Caught our double decker tour bus and rode to North Bay - the Italian section. 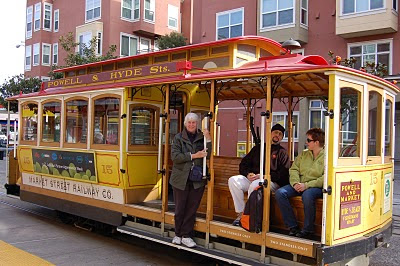 We sat outside and had a wonderful late lunch in the sun. Back on the cable cars for more fun downtown! I shopped at Britex Fabrics!! They were even having a sale - I bought 1/2 yard of Japanese navy bunny-rabbit fabric!! And yes, I could have bought more, but I was able to stuff the half yard in my purse and not carry anything else cuz you need two hands to hang on the cable cars!

That night we ate at the Blue Mermaid down at the wharf. Award winning chowder ... need I say more? They drew us in and proved it! After our Italian lunch we weren't that hungry - but needed something! The crab sweet corn chowder was also yummy!!

We woke up Thursday morning to rain and forecast of really bad weather coming. So we high-tailed it home. Drove thru snow south of Crescent City - very unusual for the coast!! We had two days of cool but clear weather with whales entertaining us! And San Francisco had their first snow since 1980 the day after we left!! Someone posted ski run ratings of all the streets online - believe me - all would have been 'expert'! We were so glad we missed it!

Then the winter storm hit here - not cold enough for snow - but man 'o man - have we got wind and rain! Even so, it's good to be home - and out of the car!! I've been getting caught up on our TIVO and quilting on my "Holiday Challenge"! Yep, good to be home in any weather!
Posted by doni at 6:19 PM 1 comment: 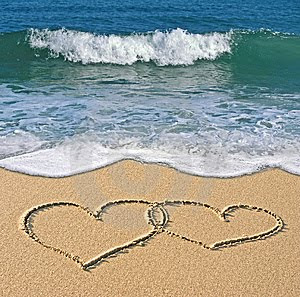 Just the latest from some of my favorite sweethearts!!
Posted by doni at 10:13 AM No comments:

Oops - I skipped a week (or two) - there goes that resolution!! We've had great weather this last month - and I hesitate to brag about it. Both because no one else has had good weather and I'm afraid I'll jinx it!

I was up in Portland babysitting while L&J went to a Trail Blazer game. We did great - even though I was solo this time. First question was: "where's papa?". Well, he stayed home to golf - do you want to call him?? YES. "But papa, you always come with Nana!" 4 years old and an expert at piling on the guilt - but aren't they all?!?

Last time we were there Papa whistled with his fingers in his mouth and Mr M turned to me with a quizzical look on his face, stuck one finger in his mouth and blew hard! I knew exactly what he was asking!! "No, sweetie, Papa didn't come this time!" We had Nana's soup and watched movies and ate cake!! Just a usual day with Nana!! 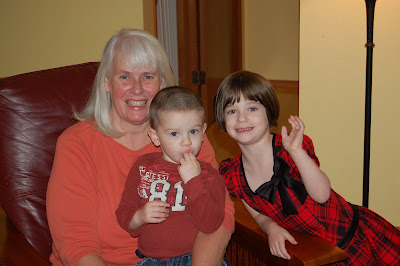 We finally got pictures of the cute outfits my sister sent them from Nebraska for Christmas! What can I say - it's a busy household!

Then to Silverton for the quilt show with friends from Newport. The show was at the Oregon Gardens - 80 acres of wonderful theme gardens! Highly recommend visiting if you garden at all! Even I enjoyed it!!

Last weekend was the Brookings guild retreat. 29 crazy quilters at the Gold Beach Resort - it was fun fun fun!! Two members each taught - new techniques and great quilts. Seeing the show and tell was awesome - all the different color-ways, every quilt looked different!

I, of course, did my own thing!!! I missed the last guild meeting because of the babysitting in Portland and didn't get the instructions and supply list. So I worked on the 2nd Eric Carle bunk bed quilt. At the last minute I threw in a gallon size baggie of 2 inch squares. So between the bunk bed quilt and activities, I sewed together NINETY scrap nine patches!! I could have sewed more but ran out of time and 'beige-ing' squares!! Makes you wonder how many quilts you can make with the entire stash!!

I might be out of touch for the next week or so --- crazy schedule. But know I'll have even more to tell you when I post again!!
Posted by doni at 1:00 PM No comments: