Lots to cover!! Wear your tennies because I'll be jumping around!

Here are the pincushions I made for the Finishing School.  I love how they turned out.  That's the 3inch paper-pieced house that's been on the web this year.  I kept screwing up the words in the sash "Azalea Finishing School 2013"  I stopped counting how many times I had to rewrite them.  Retrace them on the light table, that is.  It was mostly a spacing issue and I was always too close to each word for a seam allowance.  Next time I'll cut the sashes first and then center the words best I can.  Rick wanted to have me write "Inaugural Finishing School" but it just didn't space out correctly!

My thoughts are there will be a dated pincushion for each year!  Same pattern but different colors.  Big plans ... but I DO have a year!!  Who am I fooling???  I'll be sewing them frantically the weekend before! 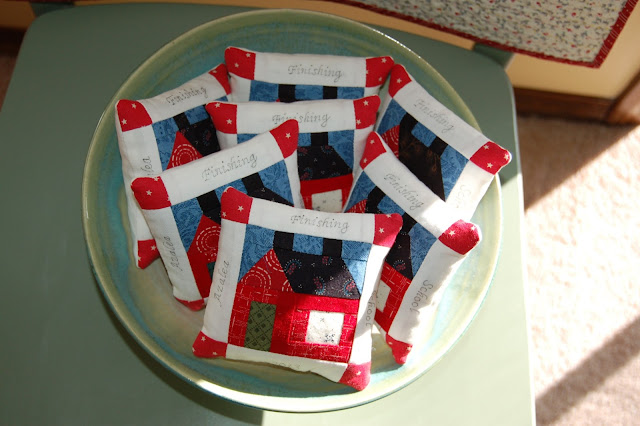 The Azalea Finishing School of 2013 was a great success.  There were just 7 of us, but everyone 'played nice' and no one ever felt left out. Everyone worked together and it was so relaxing to be together.  One friend who had to be in Europe [poor baby] instead of with us; actually said on a phone call to one of the gals - I WISH I WAS THERE!!!  LOL! But it WAS bad weather in Italy that day, not that we believed her - but how fun that she said it!!!

It was pretty awesome space above the Bandon Quilt Store; a few problems, but we made the most of it. Here is our "Class of 2013" yearbook picture!! 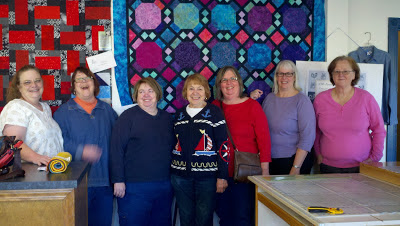 We had a wonderful time and boy - was the quilt shop accommodating!  We could run a tab for the 3 days!!  Before you think the worst - 2 gals had less than $10 owed at the end; and yes, 2 gals had more than $100 but the majority were in between!!  Including me!  It was tempting not to keep slipping down there to 'look around' - it's a very good quilt store!

The first day I worked on my Quiltmania BOM - dreaded block 5!!  SEVEN houses, and they are in 'piles'! I just have to add the details and then I'll show you.  These blocks are coming out so-o cute!

Second day I worked on a selvedge project - and I have enough trouble staying on my half of the table in normal sewing.  There are no boundaries with strip piecing!!  Here's my workspace!  My table mate was very nice about it - of course, she had an 'end table' in the corner to retreat all supplies to! 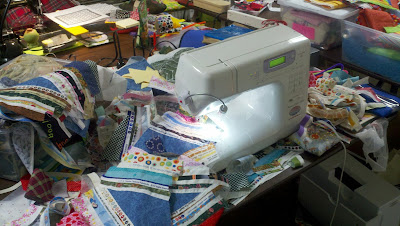 My third day was working on the blocks for the Portland Block party exchange ... I creatively used the reverse side after a cutting disaster!!

AND Finishing School for 2014 is already filled!!  Feels like success to me!

Miss P and I have a lot of fun with the paper dolls I gave her for Christmas.  Mommy very wisely says she can only get them out when Nana is there ... So every trip we work for hours!  She dictates which clothes to cut out and she's in charge of pasting them on.  Here's my favorite - out of dozens of fashionable models - I loved it so, I had to swipe it for my fridge!!  Presenting Mr Pirate!!   We had to fringe his jeans.  Miss P added a parrot for his shoulder and a sword in his hand!  She's brilliant ... at least to us! 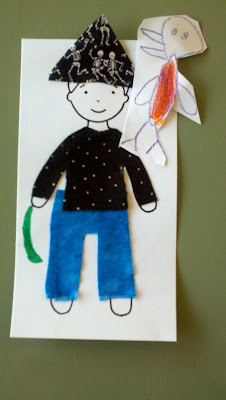 The carpet cleaner is coming this week.  Oh dear, this condo is doing a good job of trying to be bigger ... there is stuff under every bed and piled in the cupboards and most of all the closets.  Rick went golfing this weekend and I tackled the sewing room!  The sewing room won, of course, but I did stuff almost everything back into it's assigned area.  Those plastic tubs I emptied of holiday decorations are now full of sewing room supplies.  I have a new method for projects in the sewing room ... Miss P and Mr M will be here in 3 weeks for a few days.  So I also have to keep it clean and safe for them.  So my trial period will be these two weeks before I leave for Portland Block Party.  I bring the kids back with me.

Here's the plan.  One project at a time - I know it's not rocket science, but it certainly isn't my SOP!!  Right now it's the flannel receiving blankets that I thought I could teach a group to make with the flannel I got on sale - never happened.  But I have enough flannel to make 12 blankies.  They were supposed to be done for the Community Baby Shower - that was last weekend, but like Christmas it will come around again!!

We DO have babies coming out our ears this spring [don't write me, I know it's not our ears!!!] so 8-10 can go to them.  One of L's college friends just sent a birth announcement to me ... one more down!  With any luck - I'll have them all gone soon and will be more circumspect about how much flannel I buy - no matter the sale!!

Next project will be PJ pants for the grandkids' Easter presents.  I do have to organize all the supplies for the classes I'll be taking at Block Party ...its quite the list ...  but I'm waiting until after the carpet cleaning to start that.

I do have a quilt I'm binding by hand in the livingroom. Whoo-hoo!  Finished UFO on the way!  AND 12 blocks for the Block Party Exchange waiting to be machine blanket-stitched.

Christmas stockings are cued up for next year - including some commissioned stockings.  If I could get them done, mad-money for the block party.  Yes, I know I'm 'pie in the sky' here.  Fall-back - mad money for Sisters in July????

I just finished reading "Gone Girl" by Gillian Flynn.  Have you read it??  It was a real page turner.  In fact, when I absolutely couldn't finish it  Friday night, I started reading it again first thing Saturday morning!  If you've read it - let me know what you think!!

Okay - I think we're all caught up!  I'll let you know how the new plan works ... if the whole thing doesn't just suck all the joy out of quilting!!  I did have to put my mini log cabin project in the storage closet.  I'm hoping it will encourage me to get my list done, I've promised myself that it will be back soon!