It's amazing how fast the last 5 weeks have gone!  Sorry I've been out of touch.  Had a quick trip to Nebraska to help handle Mom's move to a nursing home.  She'd been in the hospital or rehab since the middle of December!  And although our goal was to get her back to  'independent living' with a little more help - everytime we got close, she came down with pneumonia again.  So we kept her at the place she was recouping at and closed down her apartment.  Very hard to do, for everyone.

I have to admit that when I came back I hunkered down and did nothing but process the whole thing.  It was weeks before I felt like myself again - but I'm b*a*a*ck now!  Tee-hee!! 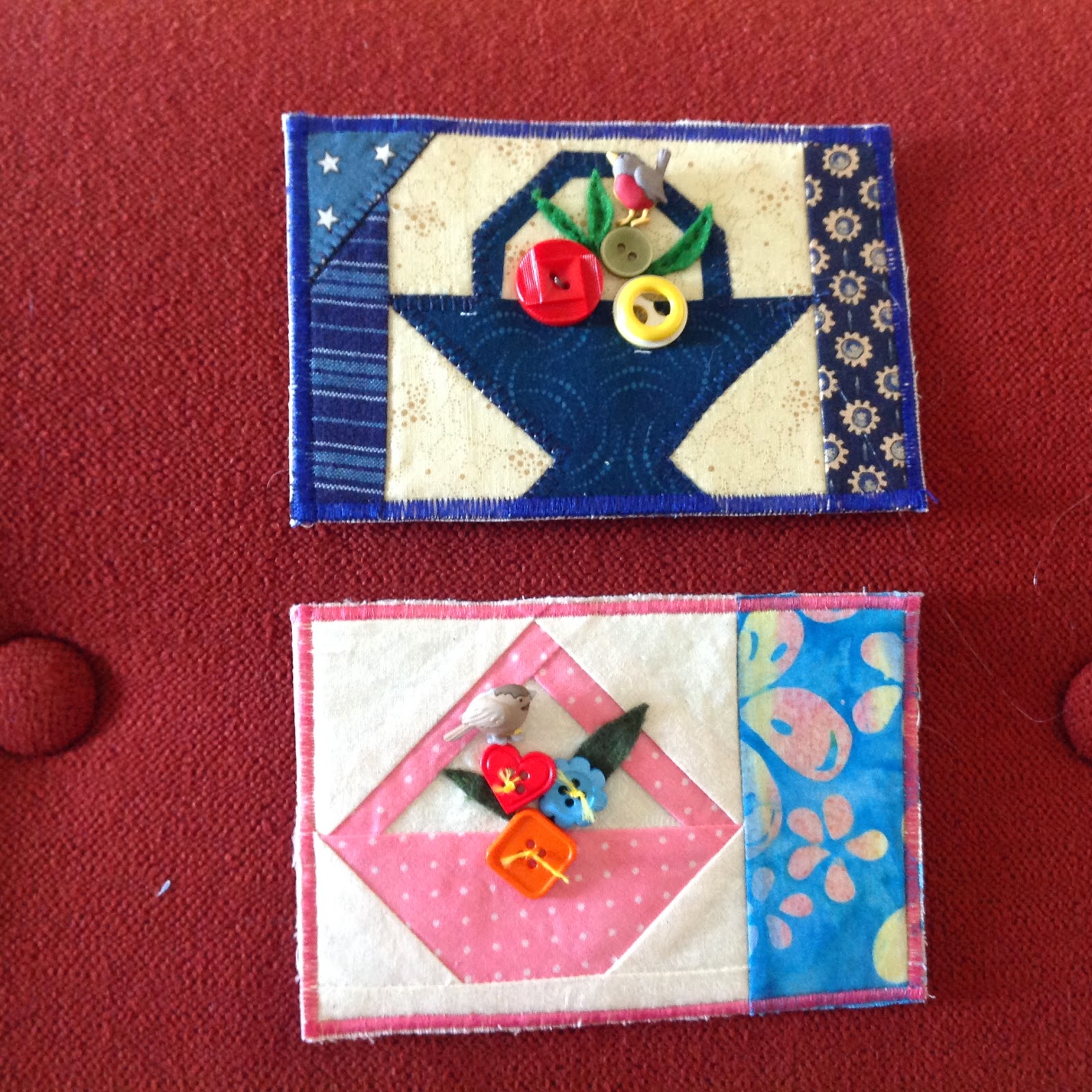 I've been pretty lax in doing postcards lately - but I love baskets so I had to join in this exchange.  I added the sweet little bird buttons and then sent them 'padded' with a FQ for my partners. 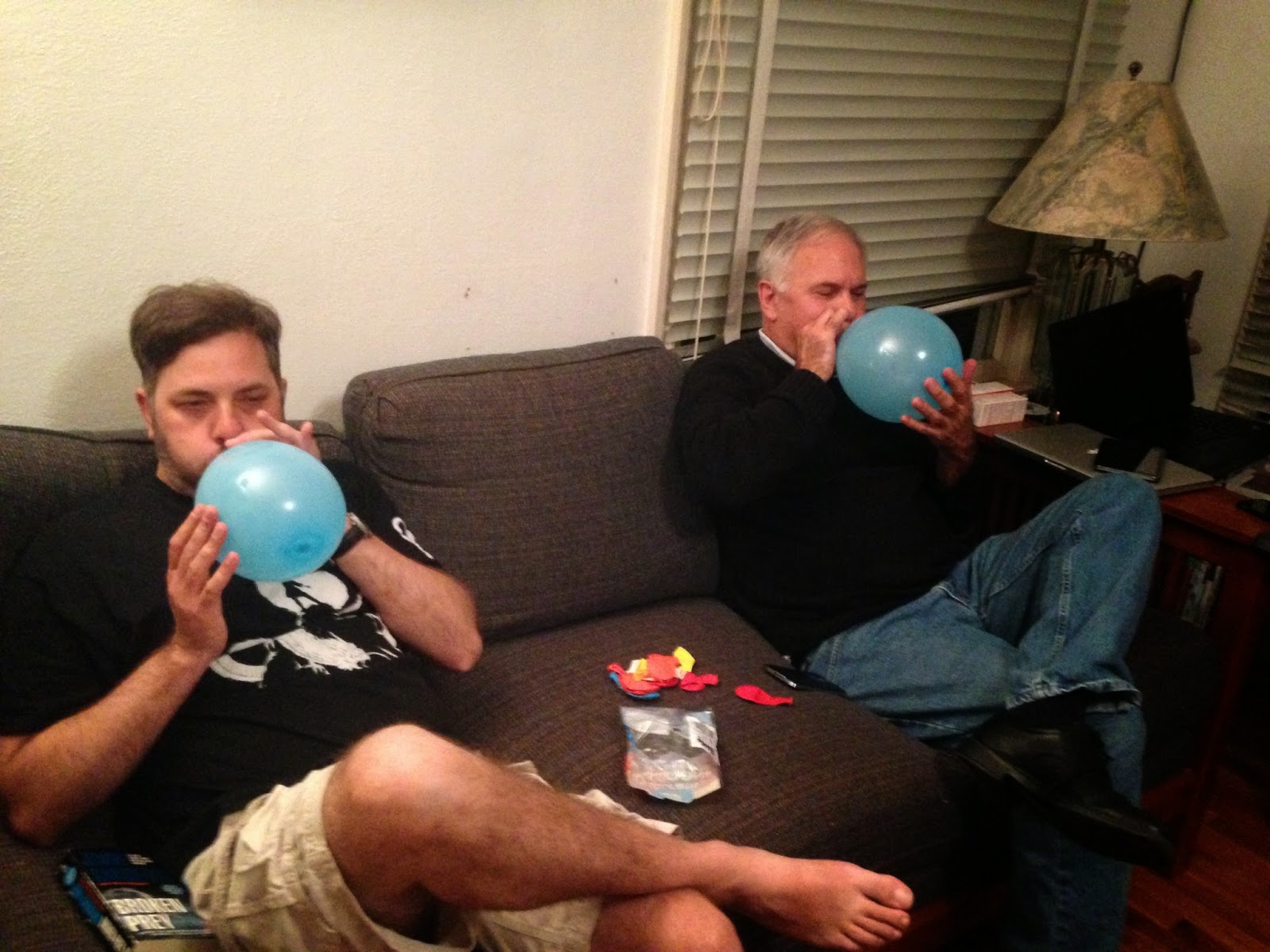 Last weekend we went to Medford for the boys' birthday(s) party.  D is now 4 and K is now 2!!  A&J are extremely busy!!  D is all about superheros!  He's got the books, the videos, the underwear and shirts to prove it.  So of course, J planned a superhero party! Here's the balloon committee, A and Papa, working hard.  Everytime I went to take a picture of them, they were blowing up the same color balloons!  Synchronized party machines!! 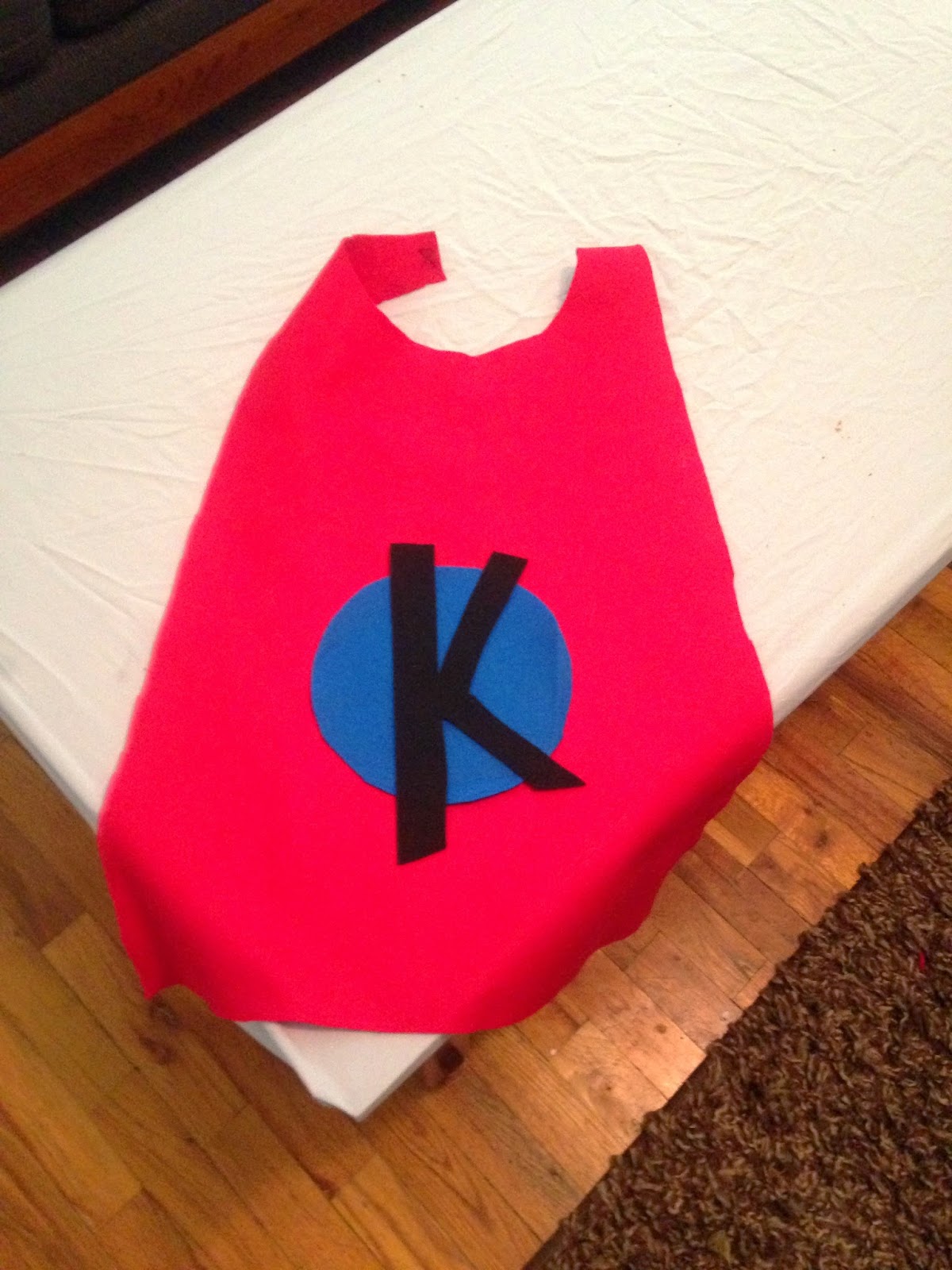 J2 found this awesome cape pattern online.  She cut out 16 capes and my job was to sew the velcro onto them.  She was busy making blueberry muffins for the morning party - in place of cake, but cake-like!  The capes were plain and at the end of the party the kids and their parents got to decorate theirs and take it home.  The felt decorations were just glued on, so we waited til the end to do that. It worked out so nicely - I'm not sure if the kids or the parents had the most fun designing them!

A friend of theirs found a little-kid bounce house cheap and bought it.  Now it travels from birthday party to birthday party.  We had it and Papa was the monitor!  The whole party went so smoothly - even though it was raining.  We had 11 kids, all under 4; and of course all the parents stayed too.  I got to hold the littlest guest when he woke up.  You forget how adorable and cuddle-ly 3 month olds are! 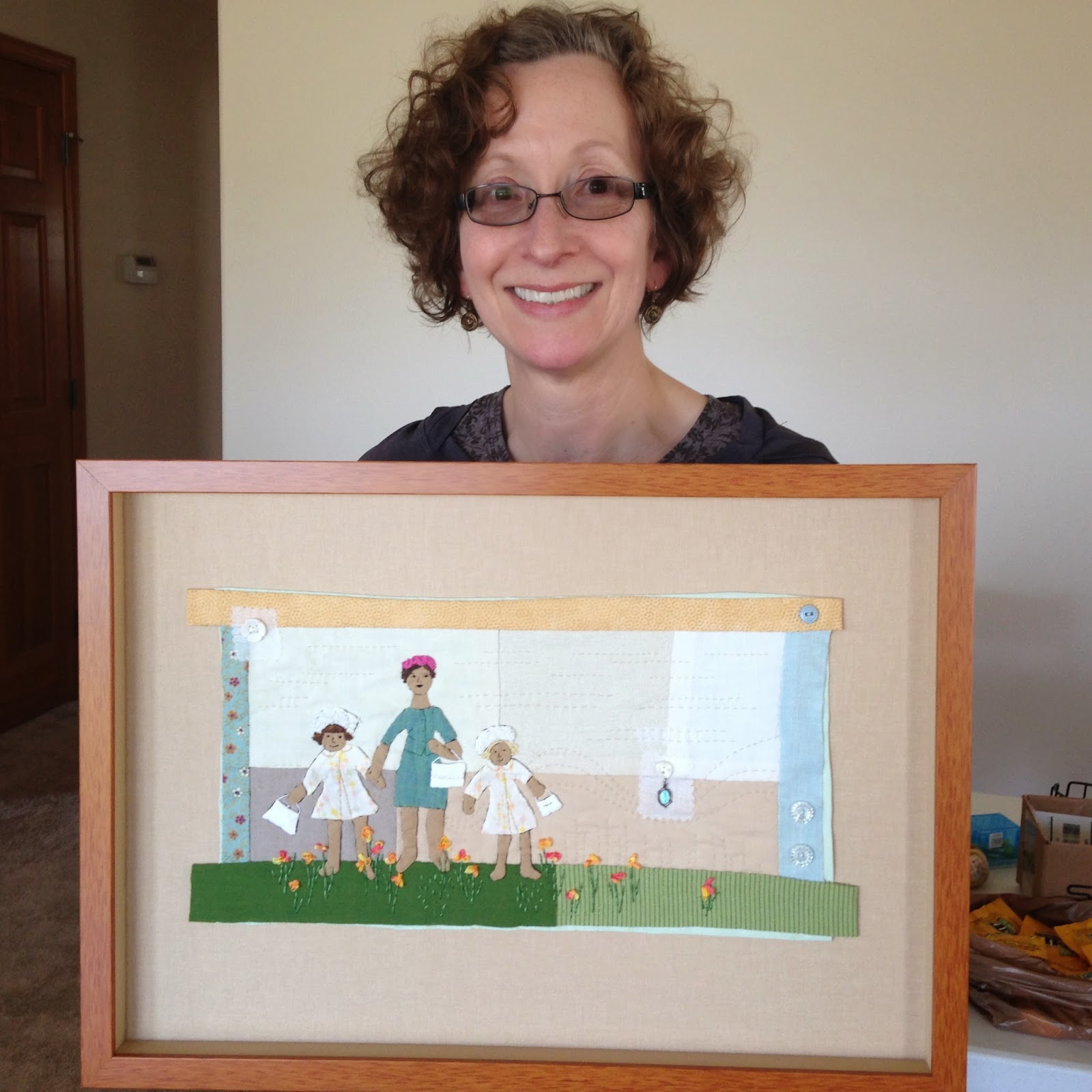 C has been hosting us for "Sewing Day" on Fridays this last month.  Her MIL is renting the house across the street from her, but won't move in until the end of May.  Let's just say, the quilters moved in right away!  It's an awesome sewing space and we've made the most of it.

This is C with her "Janet Bolton" project.  It's based on a picture of C, her sister and her mom one Easter.  It turned out adorable.  It's sewn onto the linen covered mat.  The frame shop even glued strips of the matt inside the frame edges.  This is mounted without any glass.  Very cool. 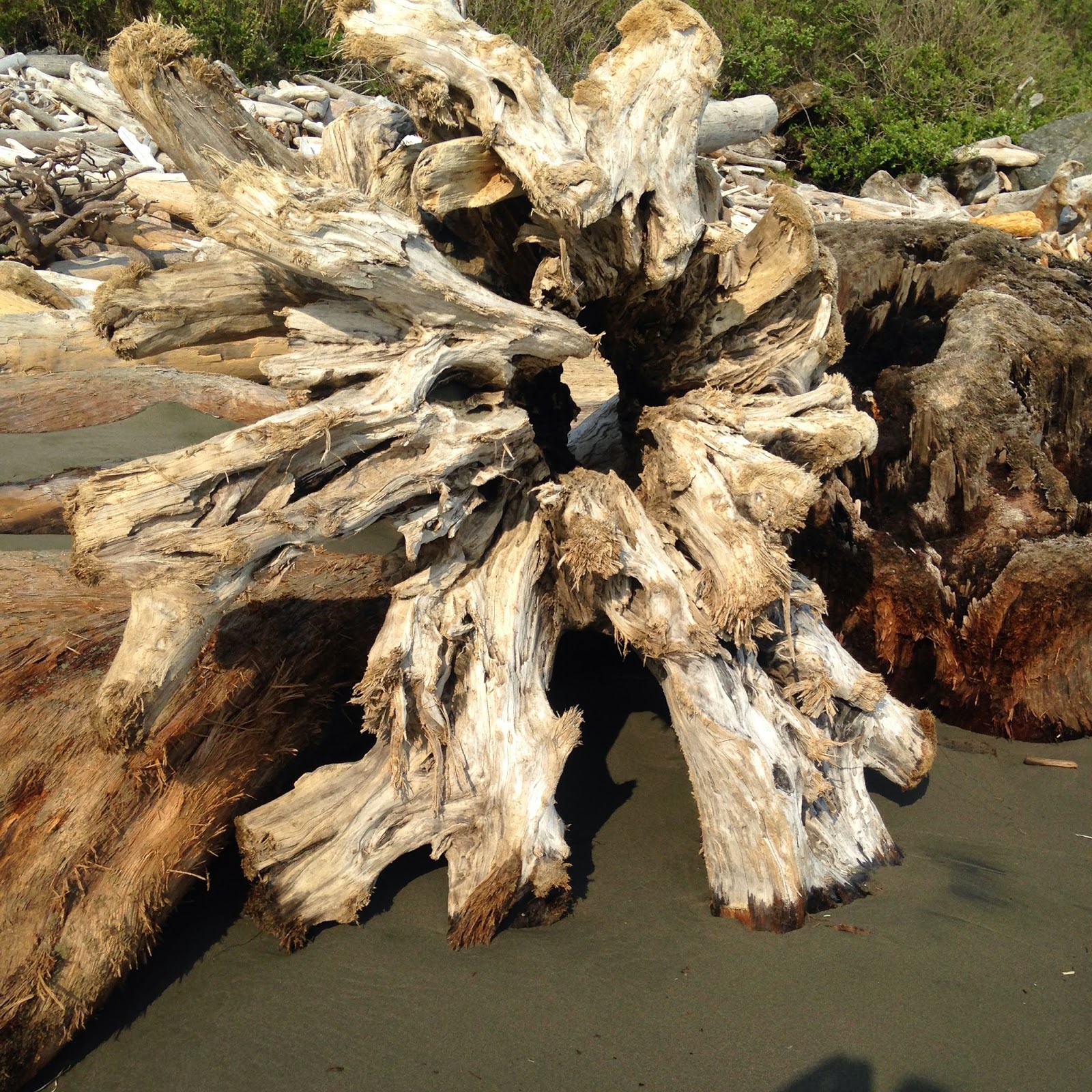 We've had a week of great weather and great low tides.  Just what I needed to get back down there walking.  Today I saw this cool driftwood stump.  You can see thru the center of it!  But it didn't look as interesting from the other side!

Hopefully, I'll be back sooner than later!  That's always my intention anyway! Thanks for stopping in.